Miramichi Mudfest: In the heart of New Brunswick’s ATV community

First, let’s rewind in time to may 2017. Surfing Facebook like I do every morning, a gentleman named Ray Croft asks to friend me. Looking at his profile, I see that he is an ATV guy so, accept I did. 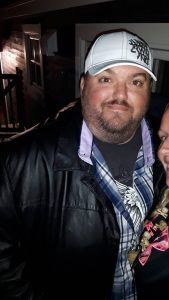 Ray Croft, the guy behind the scenes at the mudfest!

Chatting with Ray revealed a passionate guy that eats and sleeps ATV just like I do. He’s so involved in the sport that it’s his livelihood by working at Raes trailer and sports centre, a Yamaha and CFMoto dealer. We ended up about talking mud racing and that he and his local ATV club the Miramichi offroad ATV club have a yearly event called the Miramichi Mudfest stating that this would be the events tenth year anniversary and that he was working hard to make something bigger and better.

Mud racing? Hell yeah! Just the thing to test out the yet to be Mudrunner project Renegade! Let’s not get carried away here. The Renegade was a long way from being complete.

Ray and I have common acquaintances in the business and I don’t quite know how this happened but my buddy Chris Coté from CFMoto Canada popped in the conversations and thought it was a great idea to submit our long-term 2017 Cforce 500 HO to the mud fest’s competition. (It would be the little one that could’s second mud racing event in two weeks). So, we now had a major sponsor to help the ATVGuys team get to the races! It was on!

Fast forward to August 18th and we’re off to Miramichi at the crack of dawn. New Brunswick is a beautiful province! The scenery alone makes it worth the trip. Mountains and endless kilometres of forest and … wildlife, lots of wildlife. Roadkill is all too common and especially on road 108 from Plaster Rock to Renous. The absolute worst paved roads we have ever experienced with a truck and trailer! Be forewarned! It’s like a war zone! We took a loop to the north to get back home which was smoother and actually faster being able to travel at highway speeds. But again, the scenery is breathtaking! 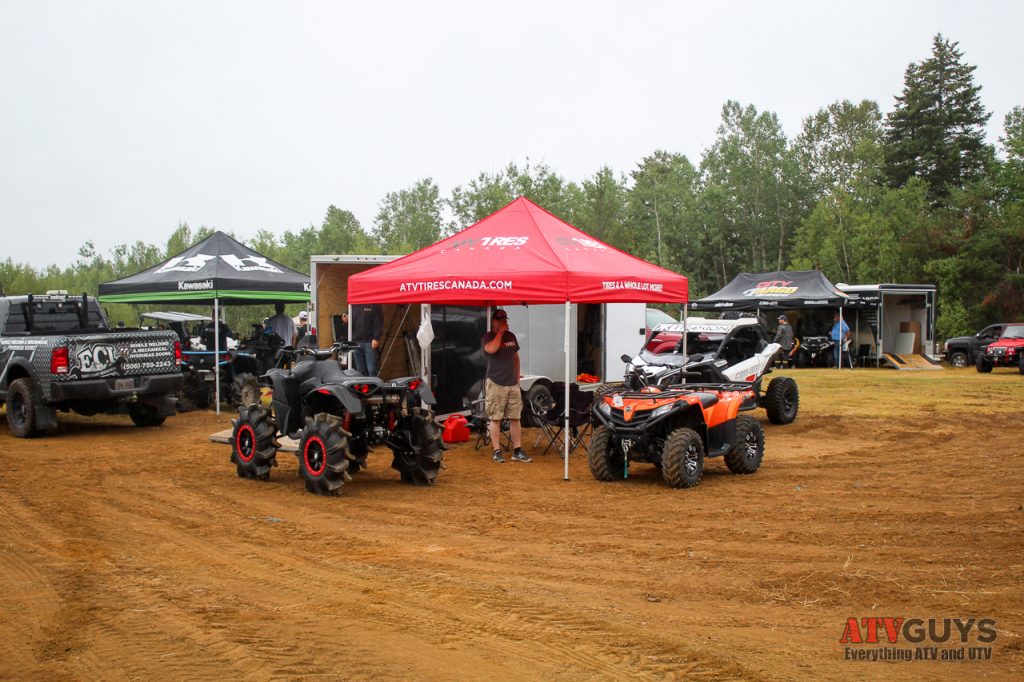 Showing up at an event like this is often a little disappointing when you see the location but such was not the case here. WOW! The first thing we see is the oval track! A first for us. There is also an obstacle course and the classic mud bog. Ray and his team were not joking. This is the real deal! You can see that these guys worked hard. Plenty of parking and a large pit area for the competitors with space for campers and trailers is the cherry on top. 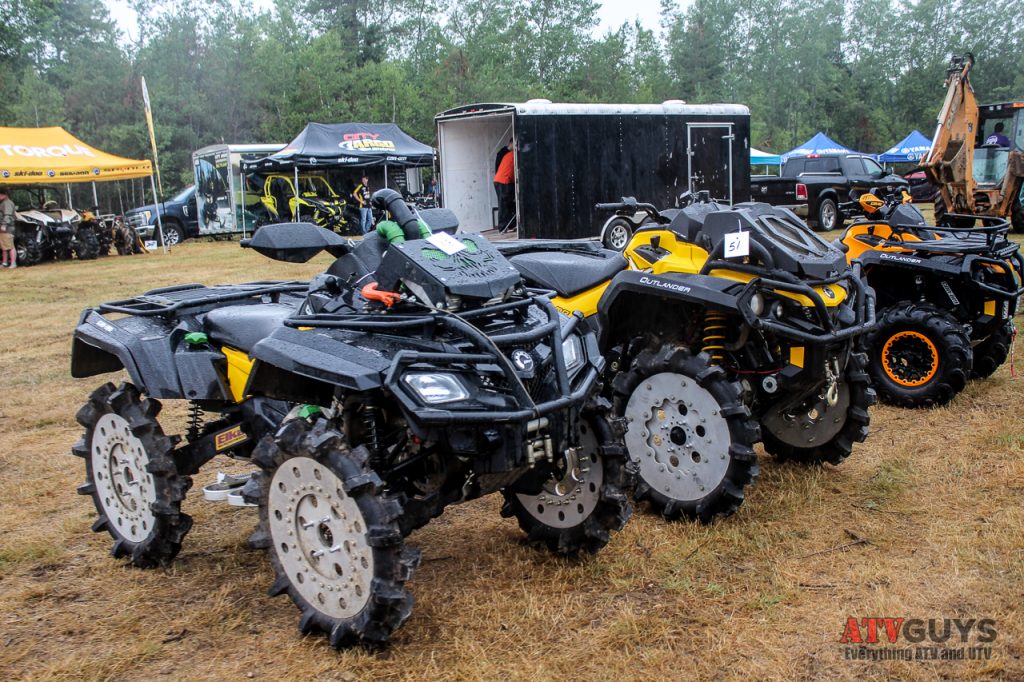 Over 80 ATVs and UTVs showed up on Saturday to compete in the three different events of the day. First the obstacle course, a very tight track with bumps, jumps, logs and a little mud on top where we entered our Cforce 500 HO to compete in the 0-600 cc class. We didn’t win but boy did Jason have a blast with it. It finished mid-pack in front of much more powerful machines with specialized tires. We’re still quite pleasantly surprised the Cforce 500 HO did so well. 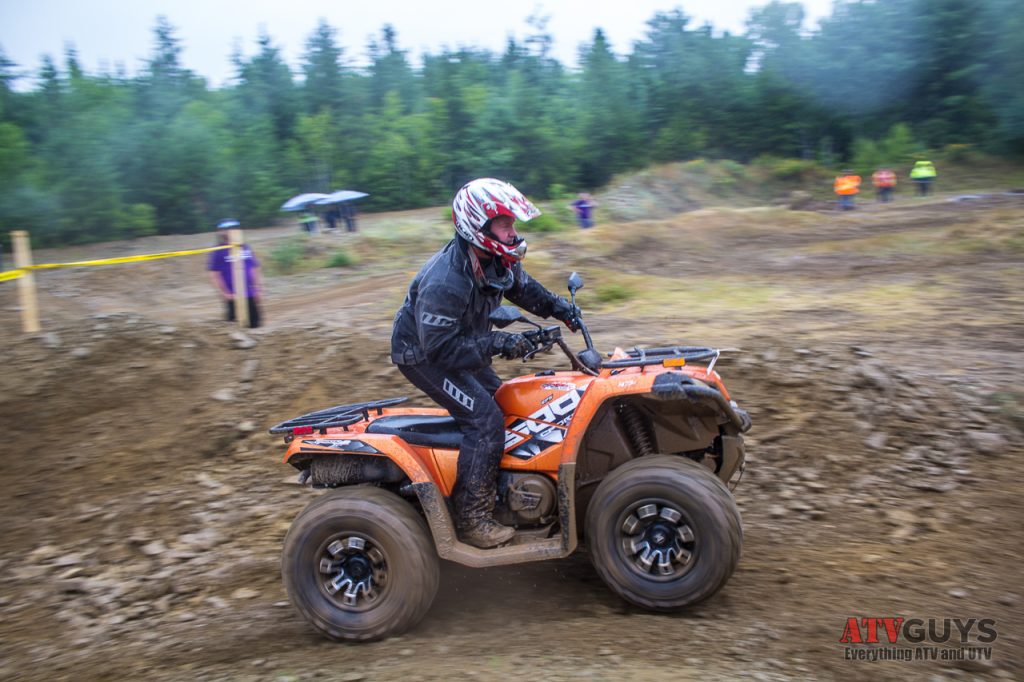 Next was the water oval. 18 to 24 inches of water sitting on 12 to 18 inches of soft clay and top soil. We entered the Cforce 500 and our full on mud racing monster the Mudrunner, a 2017 Can-Am Renegade Xxc heavily modified with a portal gear lift and huge Super ATV 32 inch assassinator mud tires. 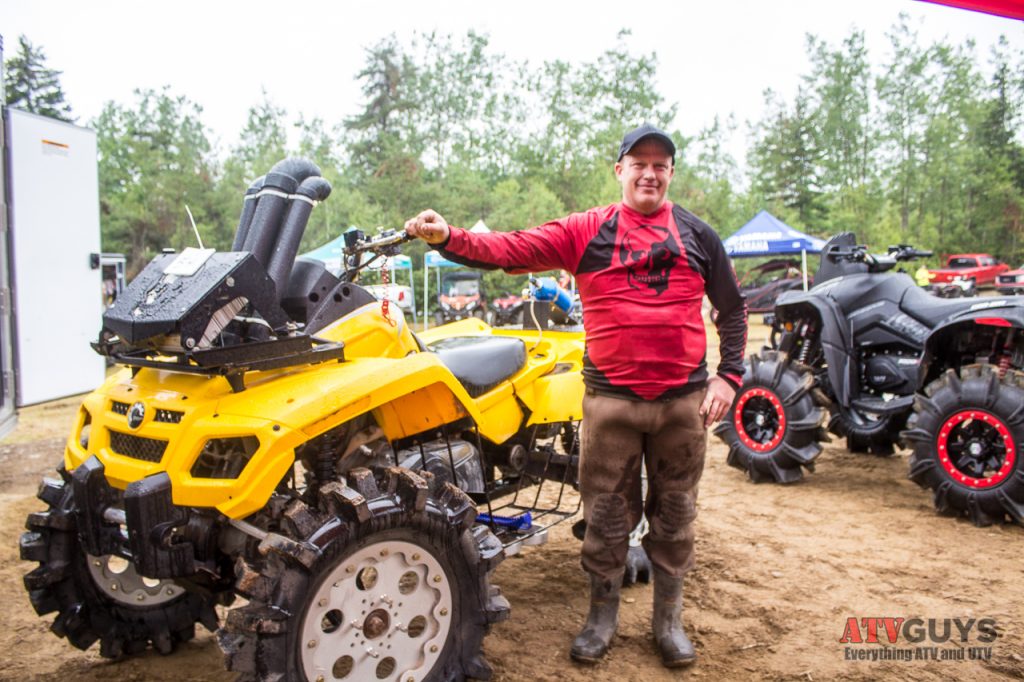 Jeremy Dupuis from Ontario with his fire breathing monster Can-Am

The competition was INTENSE! There we’re some fire breathing, nitrous burning monsters chewing up that oval faster than we could blink! Jeremy Dupuis from Ontario  (drove 18 hours to get there) was the one to watch with his big bored, nitrous injected 2006 Can-Am Outlander max with a very obvious blue bottle mounted on the rear making a statement the he meant business! With a 1st place in the 1000cc class with podium finishes in all categories entered, this guy was the showstopper with a blazingly faster bike than anything else entered on that day. 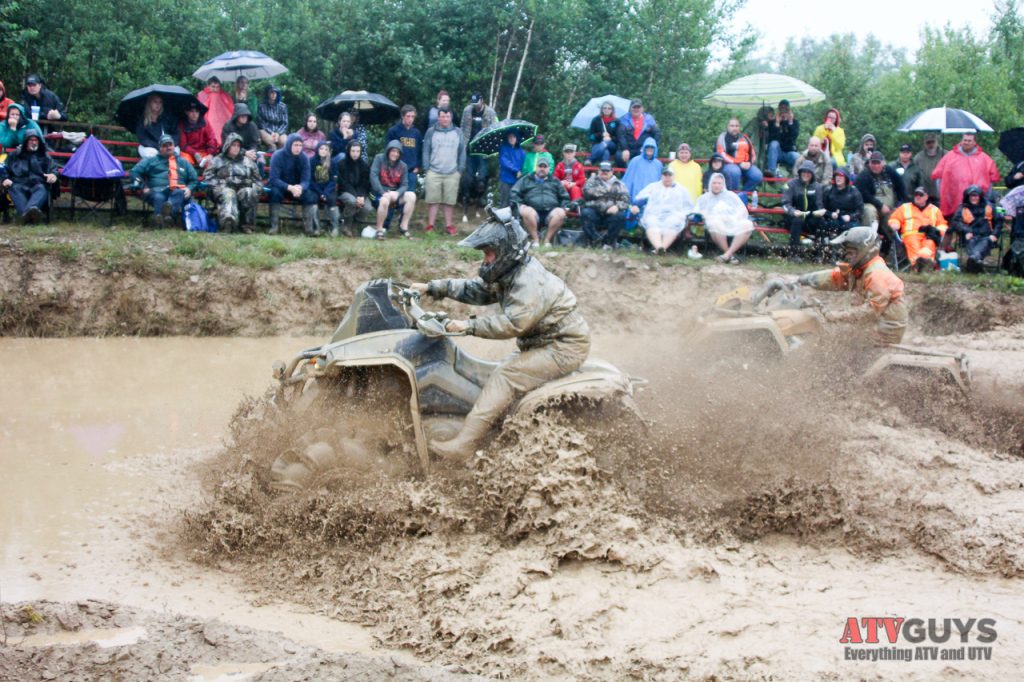 We managed a third-place finish in our class (stock engine N/A) with the Mudrunner with Louis Gagnon at the controls who was at his first ever mud racing events. We are very happy with the result and we gathered some very valuable data to for tuning and setup that will make the Mudrunner even better. It’s our first experience with a portal gearbox lift and all our lack of experience and data with this type of setup is costing us valuable time on the track. We are learning fast though! Portal gear lifts have a gear reduction (in our case 30%) and loads the drivetrain in a very different way that Marc and Jocelyn our technical guys are still struggling with for proper clutch tuning. 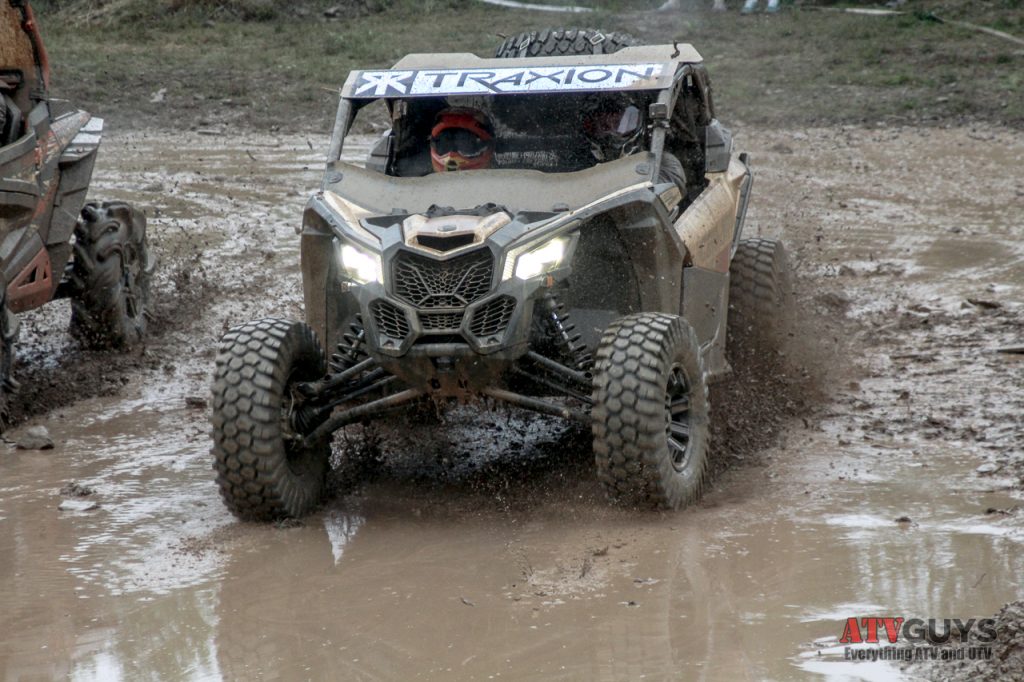 Our Maverick X3 also finished third with Jason Lajoie at the controls. We invited a passenger aboard for the oval. This young fella who is the son of Stacey Church of Action Car and Truck accessories was in for the ride of his life and a serious mudbath! Third place on Traxion Alpha Trail tires proves that we have made the right tire choice for our X3 long term rig. Though we do have a set of 30 inch Super ATV intimidators in the shop that would certainly have made us finish higher on the podium. (Maybe if you had mounted them on the X3 you would not have forgotten them at the shop—Ed.) 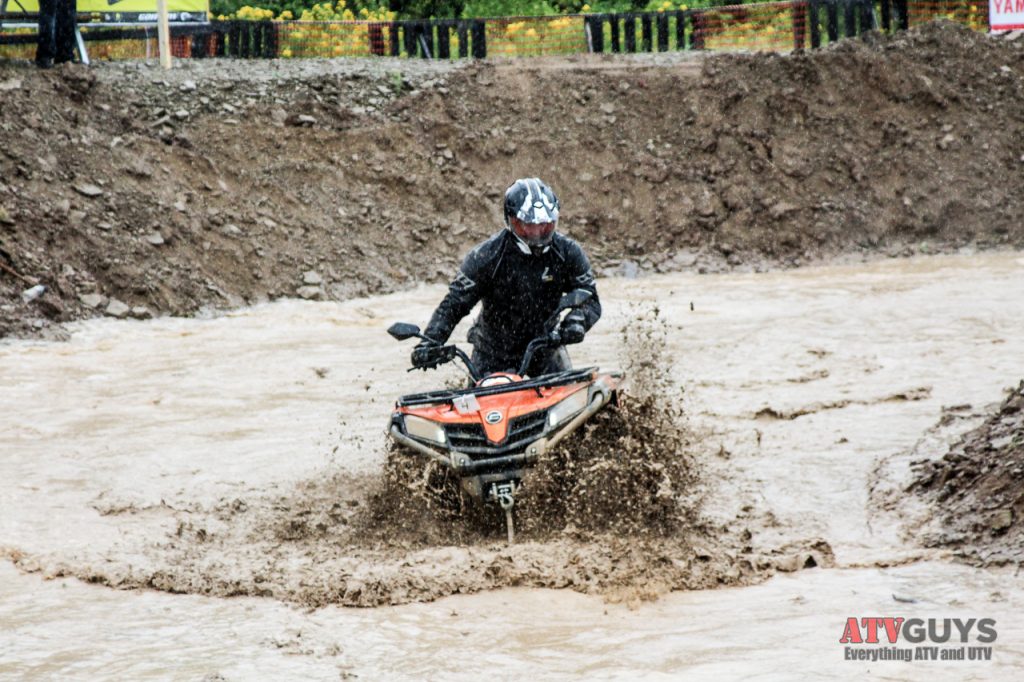 The surprise of the day for us was the little one that could as we nicknamed it. Our long-term 2017 CFmoto Cforce 500 HO. Again this bone stock little Chinese made ATV performed above our expectations with a top ten finish and was the only undamaged ATV in the three units we fielded for the mudfest. This ATV is leaving quite an impression everywhere we ride not only with us but the general public who asks us constantly what is that orange ATV we are riding. A full report coming soon. 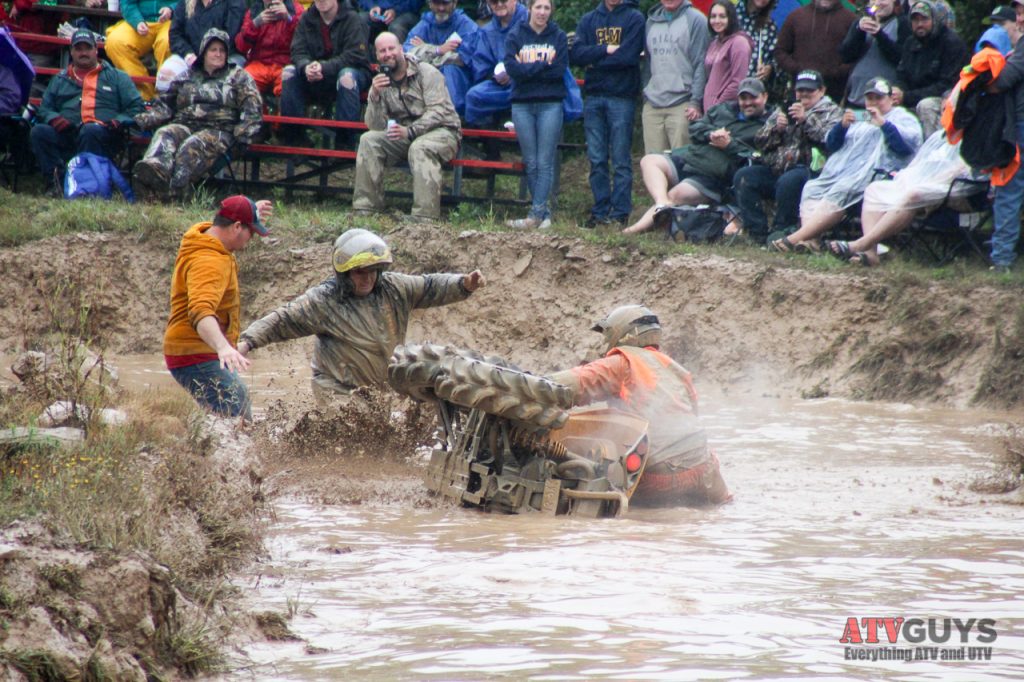 One thing we do have to mention is the positive mentality of all the competitors, the sportsmanship and the friendly helpfulness was not only apparent in the pit area but on the tracks. It was most apparent in the water oval races where quite a pew rides we’re flipped over. I was amazed that the riders racing against the flipped ATVs stopped dead in their tracks and ran to aid the riders that had their 800+ pound machine motors sucking water that will destroy an engine in seconds. Many of them jumping right back in the action once righted. Just too cool to watch. 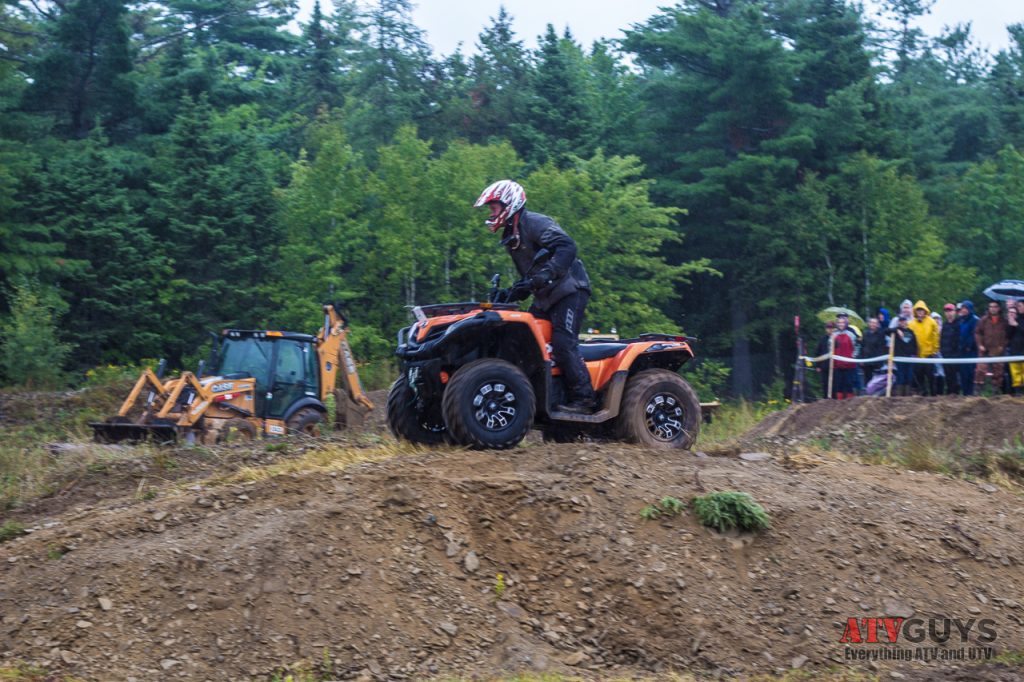 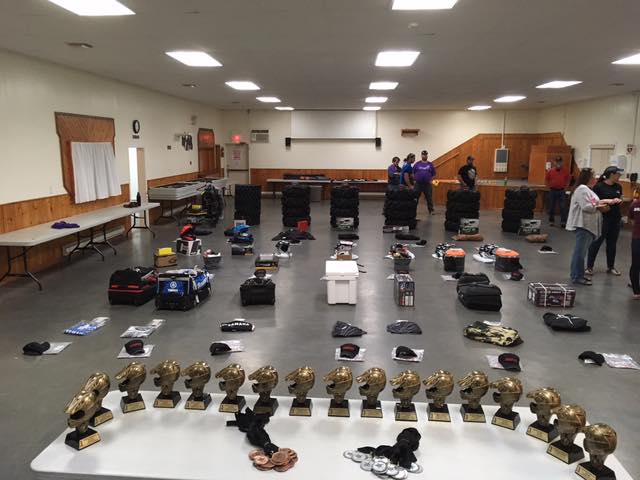 Thousands of dollars in prizes trophies and medals were handed out the the top three finishers in every class! SWEET! Photo: Kimberly Flett. 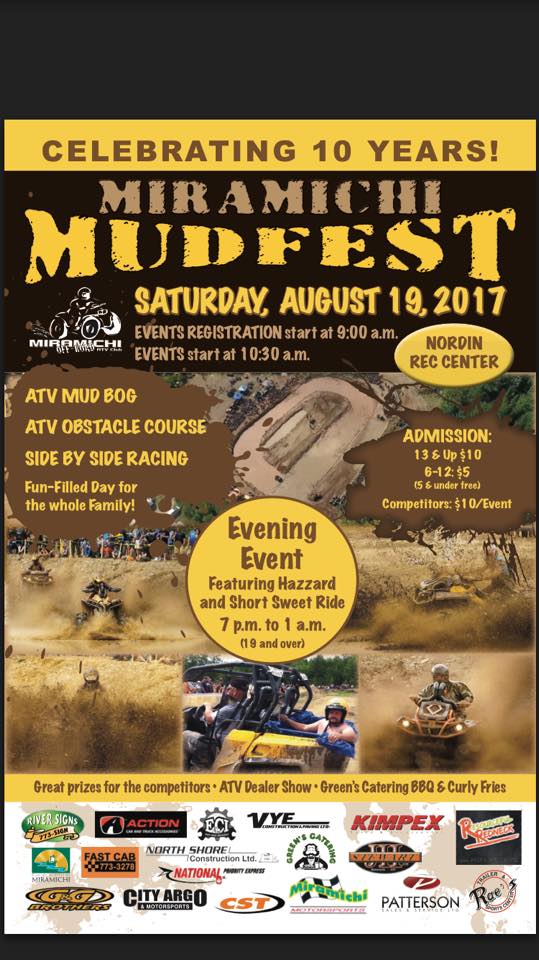 We would like to thank Ray Croft and the Miramichi Offroad ATV Club for organizing this superb venue. CFMoto Canada for helping us get to the event, ATV Tires Canada (atvtirescanada.com) for all the parts and support and you, our readers who by reading and watching what we do make our dream possible. 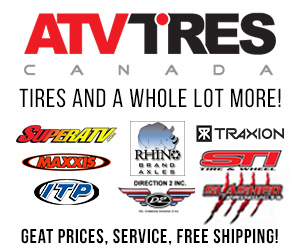 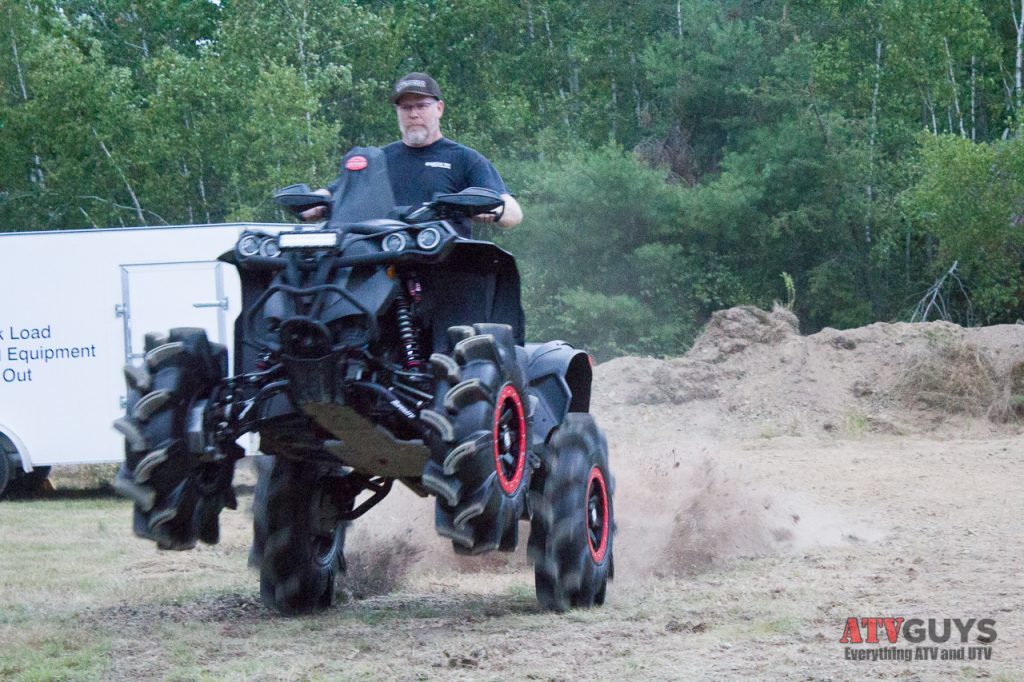