Once in a blue moon the ATVing industry throws us a curveball. Let’s face it, the ATVmarket has been almost predictable in the last 10 years. Not that there’s anything wrong with that either. The market is filled with reliable high-performancemachines and dependable workhorses so, why change anything right? The domestic(American) manufacturers own the big bore performance segment and the Japanese,own the small bore to mid size single cylinder market. So who’s left?

CFMOTO, the only Chinese manufacturer that has made a noticeable impact in the Canadian market so far.

Their first big bore two seater, the Terralander 800, quietly hit the market back in 2013.While being an 800cc V-Twin, it had a few flaws that, again, were taken care of. Two years later, the Terralander 800 became the Cforce 800 and that’s when this ATV began to get noticed. Most of the little bugs were ironed out and on the mechanical side, the units were pretty good.

My only gripe with them was the looks. They felt dated right off the showroom floor and the cheesy ’80s inspired graphics did not help one bit.   It’s aquestion of personal taste I know but I always hated them from day one.

The switchgear’s finish faded faster than a pair of blue jeans splashed with chlorine bleach and made them look like they hadbeen used and abused after one summer out in the sun. I know it’s minor stuffbut if CFMOTO wanted a piece of the big bore market, they had to get with the program and at least match the quality and looks of the big dogs in this playing field.

Let’s get back to that curveball I mentioned earlier. CFMOTO Canada launched, an all new from the ground up Cforce 800, the 800 XC. My first contact was at the annual dealer convention last summer and … my jaw dropped!

No, I really mean it, my jaw was ajar and I probably looked like my brain justfroze up when I saw it up close and personal. Aside from the looks which we were quite familiar with from the European leaks, I actually crawled under totake a look at what was under the gorgeous body. This ATV is the real deal.

This is a Chinese ATV ????  Whaaat? I get a feeling and this is off the top of my head that there is some KTM DNA in this ATV. You know? KTM, the European motorcycle manufacturer that is into a joint venture with CFMoto on the motorcycle side of things… Well, even if I’m dead wrong, the styling cues are there and maybe it’s just a tiny bit of influence, but my guess is that’s where the new styling comes from.

We’ve got our hands on a long-term Cforce 800 XC for a year from our friend Carl at VIBC, one of Canada’s oldest CFMoto dealers located in Quebec City. Carl knows we are not going to baby it and is fine with that. A pat on the back and a “just send it” and the Cforce came back to our studio.

Our tester is black and it is gorgeous! I never thought I’d ever be saying this about a Chinese ATV, no chance in h … Uhhh, I just did eh! but, it’s true! They finally nailed it! The flowing lines, that grille and those headlights! So beautiful and tastefully done. I’m liking this machine already. Even the rear end looks great with the LED lights and larger storage compartment. The luggage racks are made of injected plasticwith a steel chassis and complement the aesthetics quite nicely.

And it goes on and on…

The seats and ergonomics are the best part. Much better comfort for the rider and passenger. The multi-position handholds are perfect and better placed for the passenger when the going gets rough.

Subtle touches like a dual USB power outlet, the lockable transmission, stock dual mirrors that you can actually see what going on behind with and the pre-wired trailer harness make the already long feature list even better.

Trust me on this, you have to see one in person because the pictures do not tell all.

Now, I’m not a specs driven guy and I’m not going to bore you out of your mind with details and marketing hype so, for specs go on over here: CFMOTO Canada. I’m going to keep this short and mention the features that stand out on the mechanical side of the CForce 800 XC.

All new! It’s still a V-Twin with a slight bump in power to 65 HP. The primary centrifugal clutch is finally gone! Dry clutch baby! A Canadian-built CVTech Trailbloc primary mated to a Invance secondary drive again, from CVTech to a stand-alone transmission that shifts gears much, much smoother.

This setup looks a lot like the Outlander and Renegade from Can-Am does’nt it? I love it! All the power is directly fed to the CVT and back out to the transmission. Instead of the old all in one design of the previous model which felt like it robbed a few ponies.

Gone is the top end happy mill that lacked a little torque lower in the revrange. This new engine has a lot of grunt off idle and through the mid-range but is less nervous near redline. I find this engine better suited for a big two up machine. It’s also much smoother. The vibrations are damped better and make it feel more sophisticated than the previous model.

Better and better! Better engine configuration, better tune and better CVT Drive with a smoother shifting transmission. What’s there not to like about this? 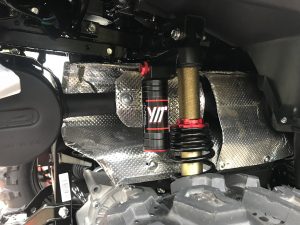 Industry standard upper and lower A arm up front but out back it’s all new. What? A trailing arm type suspension? YES! Again, very similar to a Can-Am but also different enough to get my full attention. Will the rear end chatter that nagged me on the previous model be a thing of the past? While the springs are still a tad too stiff for my liking, the ride is greatly improved. I will spend a little time and soften the preload on the fully adjustable shocks and see if I can dial it out.

A new more powerful power steering unit makes the Cforce a breeze to steer. Much better! The play that was present in the previous model’s column that had a tendency for the rider to constantly overcorrect is now totally gone. This transforms the XC into a precise corner hugger and I kid you not! High-speed dirt roads are a total blast and the XC can be ridden at top speed straight as an arrow.

The tires on the unit at the dealer show were Stag radial by CST that I really like but the final production units come with 26 inch Abuzz bias tires shod on 14-inch aluminum wheels. They are fine but a Stag radial would have been oh, so much better.

– Other mechanical goodies we noticed:

Mechanically speaking the Cforce 800 XC is a leap forward for CFMOTO and I like what I’ve seen and sampled so far.

Louis, our Co-editor snatched the XC from our motor pool and has put a little over 400 km on the unit with zero problems so far. He took it back to the dealer for its fist scheduled maintenance, all oils changed, valves adjusted and a few adjustments here and there. Nothing a miss, we are good to go.

Note: If you are to be winter riding, we suggest you use 0W40 full synthetic oil. With the mineral oil that came supplied with the unit, cold starts are not easy. Under -20c it will most likely not crank fast enough to start if left outside. With the zero weight, it starts like a champ.

Now that the maintenance is done, the break-in period is over. We get to beat on it for another 10 months! We are going to put some serious mileage on this unit and we will keep it bone stock. The winter trails are mostly open now, so off we go!

Next update should be around February/March 2019. See ya then!