Since CFMoto’s arrival in Canada in 2010, we have had a lot of negative reviews of their product and some of them justified with pre late 2014 owners. CFMoto Canada is still paying the price for these mishaps to this day. But, instead of giving up as many of the generic Chinese brands that folded and left their customers with expensive paperweights, they rolled up their sleeves and worked with the manufacturer to redesign their ATV and UTV lines from top to bottom. With the subsequent arrival of the Force series, the Zforce, Cforce and Uforce, CFMoto is now able to compete in the international off-road vehicle arena.

NB: This long-term abuse is not sponsored or endorsed by CFMoto Canada. The repeated abuses that we subject this ATV to should not be reproduced on your machine. Lack of maintenance is NOT covered by the manufacturer’s warranty. The majority of the abuses inflicted were on closed circuits off federated/ATV Club trails where emergency personnel was ready to intervene if needed. 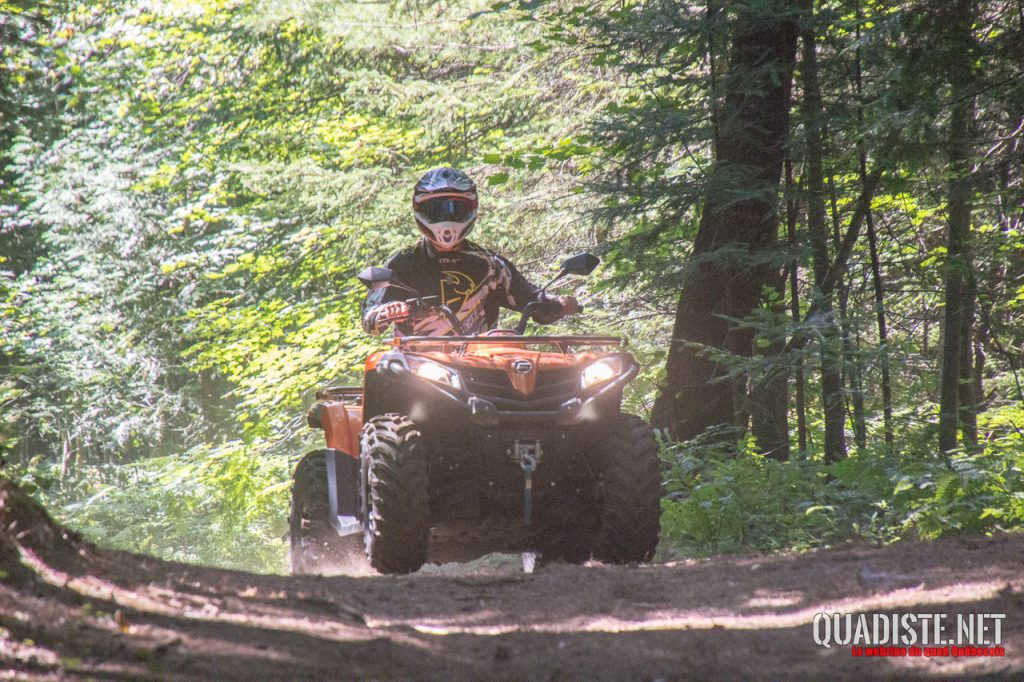 A new model for 2017. This small 495 cc ATV is built on the more compact platform of its 400 cc little brother to reduce weight and make it more maneuverable and versatile…

For this long-term test we chose not to use a press unit supplied by CFMoto but a machine belonging to one of our partners in order to have the experience as close as possible to a consumer who seeks to own one. 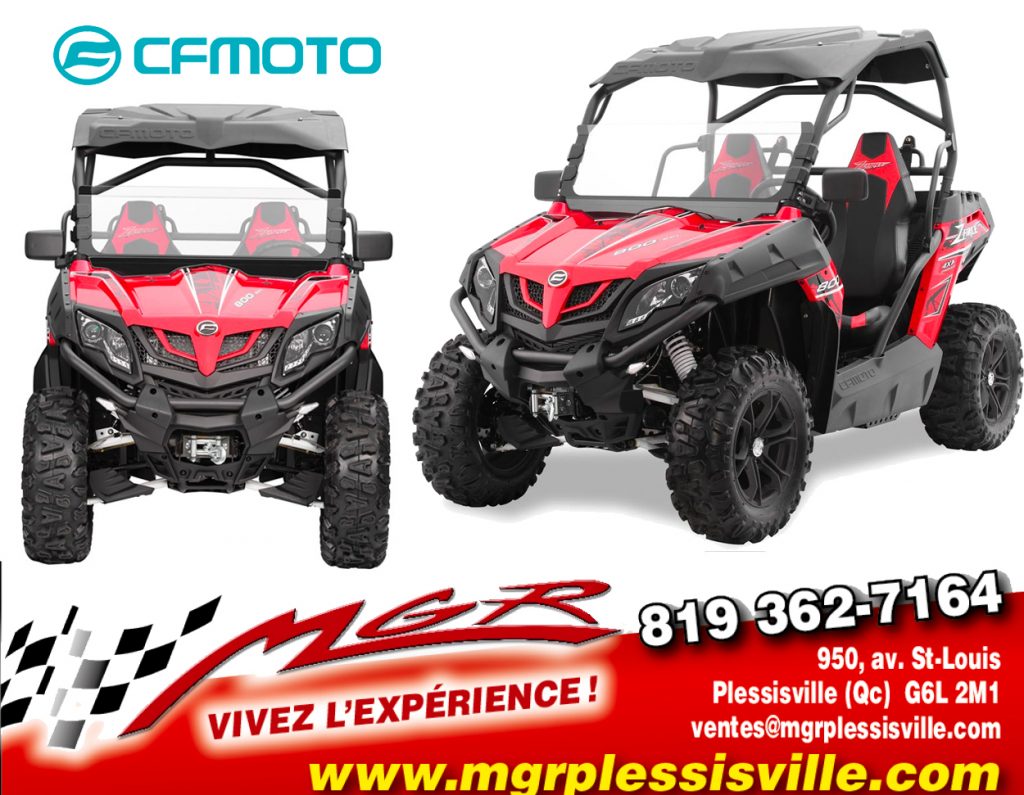 MGR Suzuki/CFMoto from Plessisville is one of the oldest CFMoto dealers in Quebec and they have a very specific way of preparing units for sale which makes them one of the dealers with the least returns within 30 days of purchase in Canada. In short, they are a reference in this field. With the machine assembled and well prepared, we took possession in early June 2017 and since then, we have been beating the living daylights out of the thing!

Sébastien Fortin, the GM at MGR CFMoto was well aware of what we had in store for our little “Egg Roll” as we nicknamed it and gave us carte blanche with a big smile by saying and I quote: “Give it hell” and “have fun”.

Since that fateful date, we have abused and tortured the little 500 as never before for testing. It’s simple, what we are trying to prove is that reliability and endurance is in fact on par with other manufacturers. High revving, no holds barred kinda stuff. We haven’t even checked the oil since we got it.

It’s a make it or break it deal! 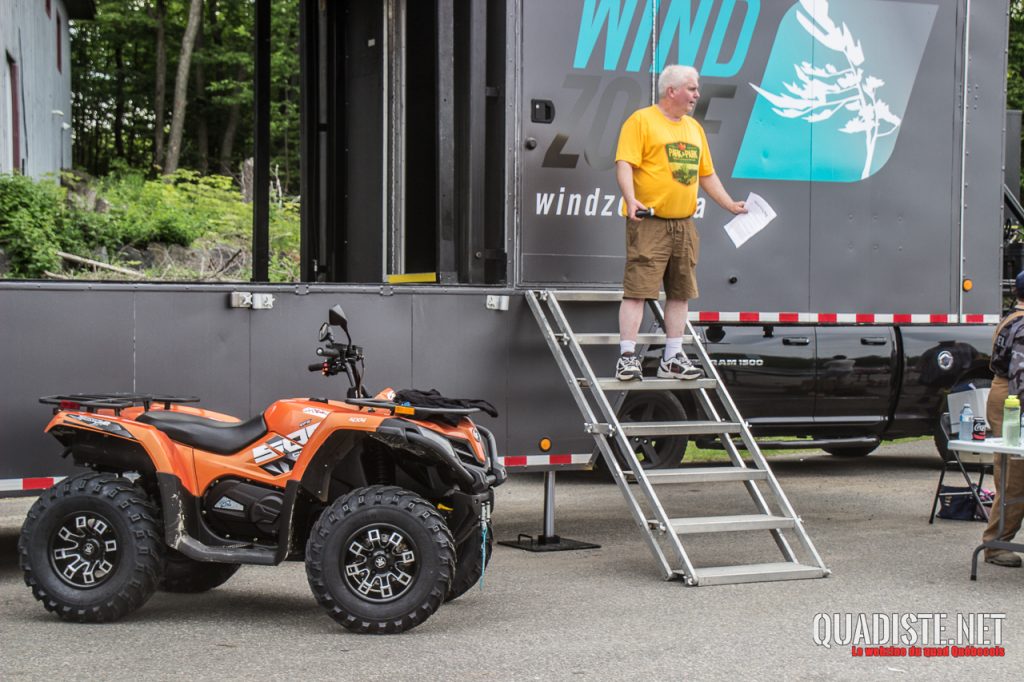 A very tough ride led by CFMoto Canada in Park to Park’s wild trails network for the Prostate Cancer Foundation. 140 km of trails of conditions varying from flat out easy stuff, to humps, bumps and ruts capable of ripping out your fillings, mud and a lot of water. The engine air intake even swallowed a few tablespoons of water. PHEW! Then an express return via secondary roads to make in time for supper where Jason found out the maximum speed the Cforce 500 is capable of: 95Kmh in a sustained matter. 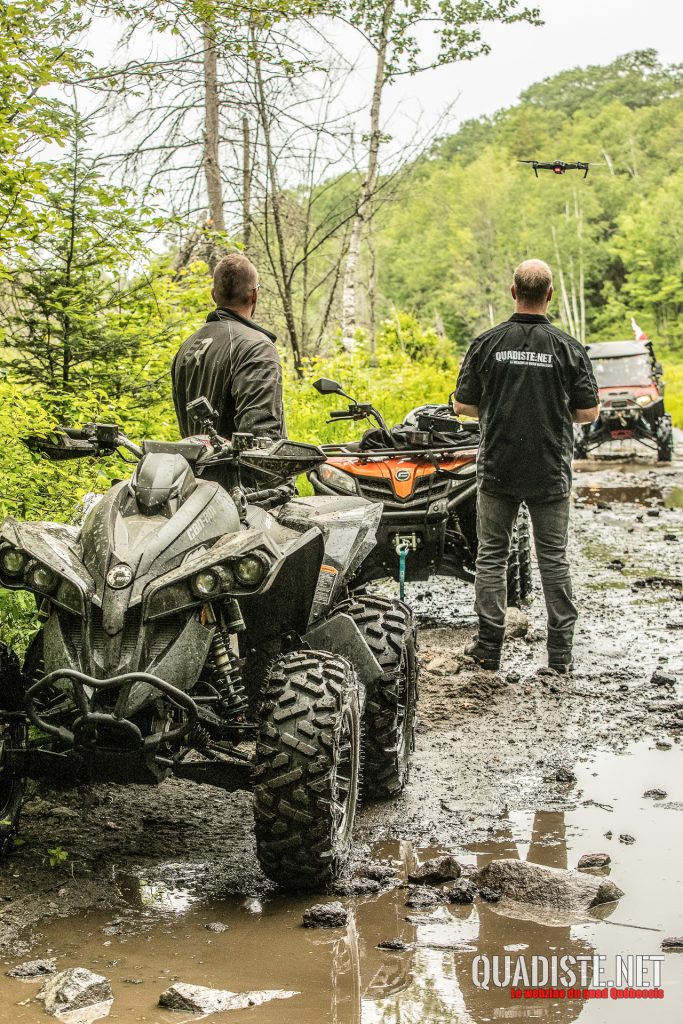 Pretty tough on a machine that had twenty kilometres on the clock! When we were on the way back to Quebec, Jason and compiled the abuse we subjected to our poor little “Eggroll” to.

The CForce ended this adventure with only one glitch: A punctured right rear tire which was totally our fault. Submerged in water, high-speed bumps, rocks and just about anything Mother Nature could send us including the kitchen sink! 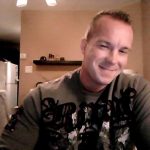 It’s been a few years since I’ve been hearing stuff that Chinese ATVs are no good. When I was offered to try the CForce 500 HO, I had no expectations. I rode the machine at the Ride for Dad’s fundraiser in Parry Sound Ontario for a whole day of riding and shooting videos.

The machine is surprising. I was comfortable during the whole ride. Power steering does the trick for me. I liked the fact that when I give full throttle, the machine does not respond abruptly. It helped me make up for my driving errors (Jason is a UTV guy with virtually no ATV experience. Ed.) and make me feel like a better driver. I did not spare the “EggRoll” on bit though, and rode it like I’d stolen it all day! Result: only a punctured tire, which was entirely my fault.

I went riding in federated trails in Quebec’s Outaouais region with a few friends. I only replaced the split tire from the Parry Sound ride and did not touch, adjust or check anything. A good 200km at a good clip. 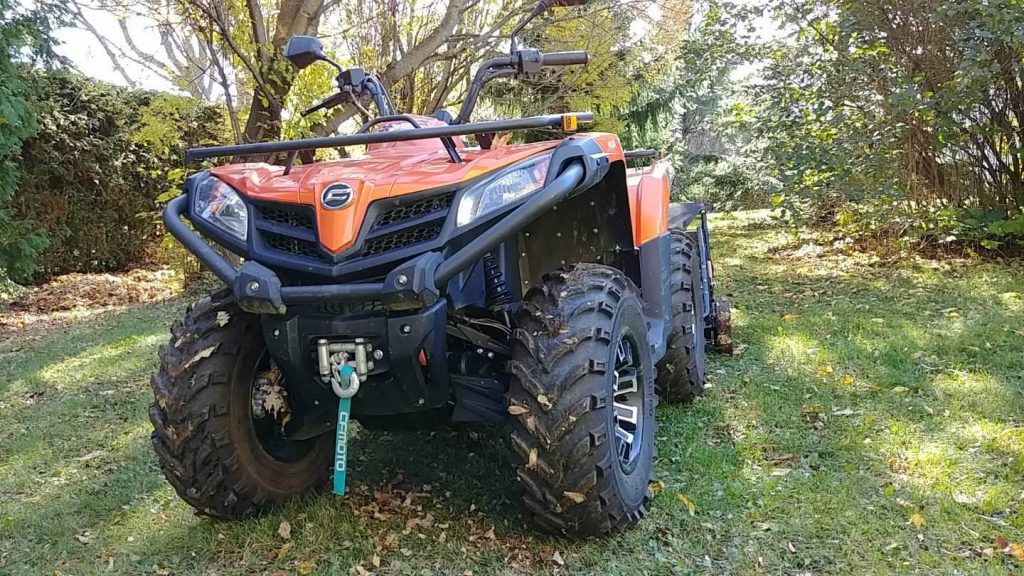 Do you know what surprises me the most? The level of performance of the 500 cc compared to what is available elsewhere in the market in this category. Still, it’s not a Ferrari but, this little engine has a lot of grunt where it counts. Being used to big 1000 cc bikes like my modified Renegade 1000, I would have thought to be a little bored. But, no, I was able to follow others without difficulty.

One thing that annoys me though: The power steering. I have always complained about the lack of assistance on the Cforce 800, but here, the Cforce 500 produces a little too much for my taste. Up to 40kmh it’s ok but above this speed and especially above the 70kmh mark the steering becomes “too” responsive causing a little swaying on asphalt or flat hard packed trails if you’re not giving it your full attention..

An ultimate test of performance and torture of an ATV or side by side is a mud-racing event. You know the kind with deep sticky stuff with clay that is the most destructive on drive belts? Yeah! This kind of fun!

For the festival, I gave the controls to our Facebook guru, Louis Gagnon:

Last august I was at the festival hors route in Sainte Beatrix Quebec and I had the task of beating up our CFORCE 500 HO for different events of the weekend.

We entered the “Eggroll” in three events:

Saturday morning was at the extreme challenge. A closed circuit with several pronounced curve, puddles, slimy mud and jumps in times heats. It was my first experience riding this quad. From the first try, I see how this little beast is pleasantly agile. The 38 horses were present and accounted for as I never thought this little engine could deliver. 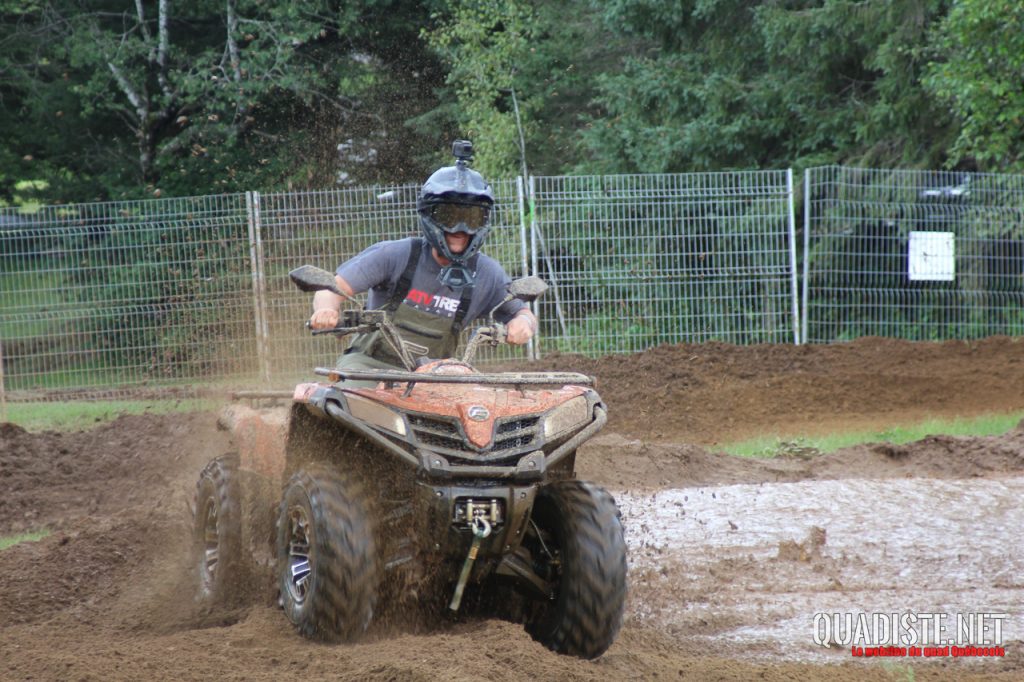 I still managed to finish fourth in our category with the CFORCE 500 HO. Well, that was a surprise the Cforce being the smallest displacement ATV entered in the event! It competed against 600,700 and 800 cc in the stock class! Still very surprising. (Louis is being very humble a he rode that thing so hard and the track was suited for the “Eggroll’s” linear powerband. Ed.)

On Sunday morning it was time for the MUD BOG where we submitted the CFORCE to a very gruesome test.

The MUD BOG consisted of crossing the longest distance in a pool of thick clay type mud with a depth of about 24 inches and more in places. We entered it just to beat it up and see where it would stack up to the competition in the 0-650 cc class!

Full 4×4 locked mode and low gear and go! I was surprised that it managed to almost cross the 350 feet pit outdistancing many more powerful machines!

Of course we did not expect to win anything but, again, it managed to surprise me and get people talking in the stands and pit area.

You know … this type of question: It’s a Chinese bike? CFMoto? What the heck is that thing? 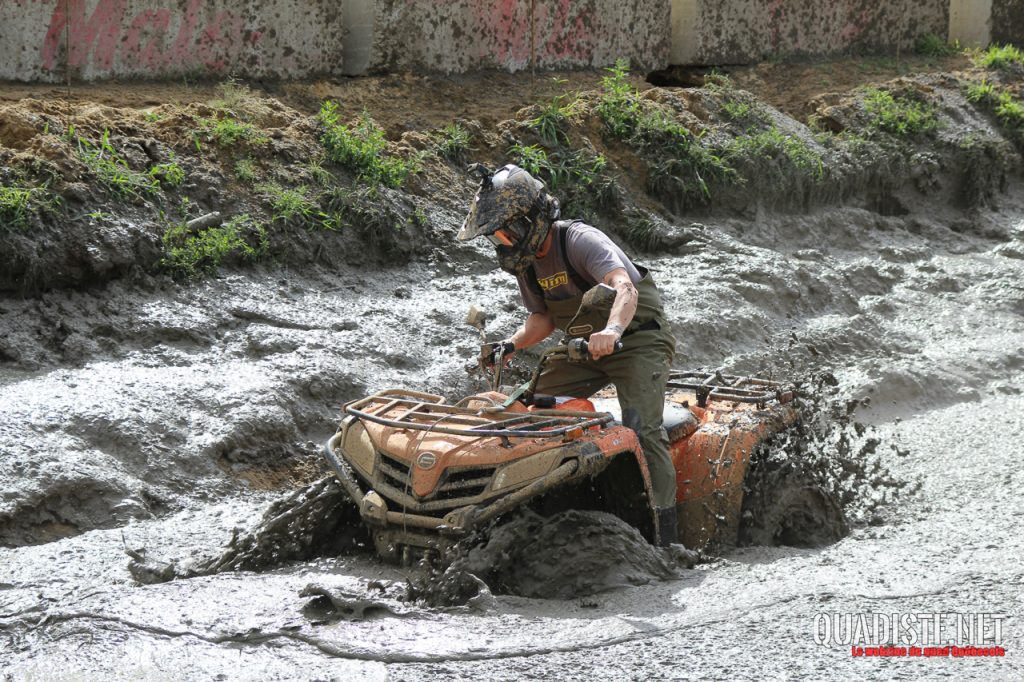 The final event of the weekend and the most popular by far was the mud drags. I had to compete against quads that were much more powerful. It’s a 2 against 2 races on a double muddy and straight 250 feet track. The goal is to reach the finish line first and as quickly as possible. I managed a fourth place with this little quad who has never shown a sign of weakness or a breakdown during the weekend.

Basically our CFORCE 500 HO was always ready to play throughout the weekend! 38HP doesn’t seem like much but it just plain works as a package.

To all naysayers about CFMOTO I say: watch your rear-view mirrors because they (CFMOTO) are coming to play on the same ballpark as the other major oems faster than you could think. 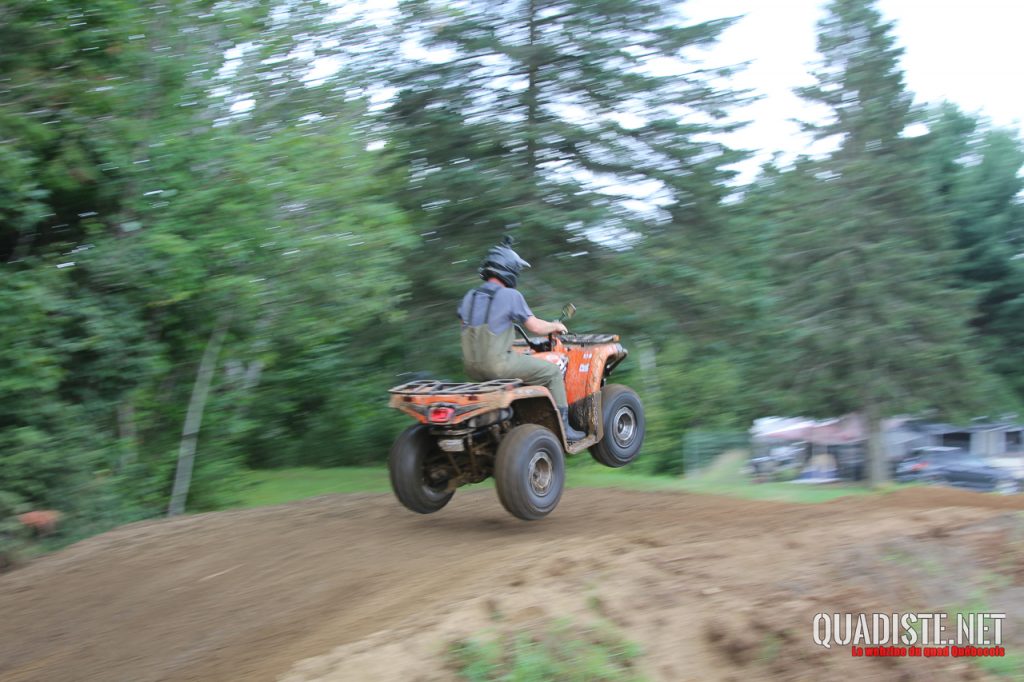 The Miramichi MudFest was celebrating its tenth anniversary last August and the Quadiste. net was invited to join in on the party.

After 18 hours of driving with our loaded trailer, we were ready for the best or the worst the Cforce had to offer. Although we brought our Mudrunner to compete in the big bore classes, the little Egg Roll stole some of the show from our dedicated mud racing machine!

The only small bore CFMoto entered in the event impressed the crowd to the delight of the local CFMoto dealer. CFMoto is virtually unknown in eastern New Brunswick and we’re asked a lot of questions about the little 500.

For this event, we had our new guy, Jason Lajoie at the controls.

Subsequently, I was handed the CForce 500 on August 19th for the Miramichi Mud Fest. 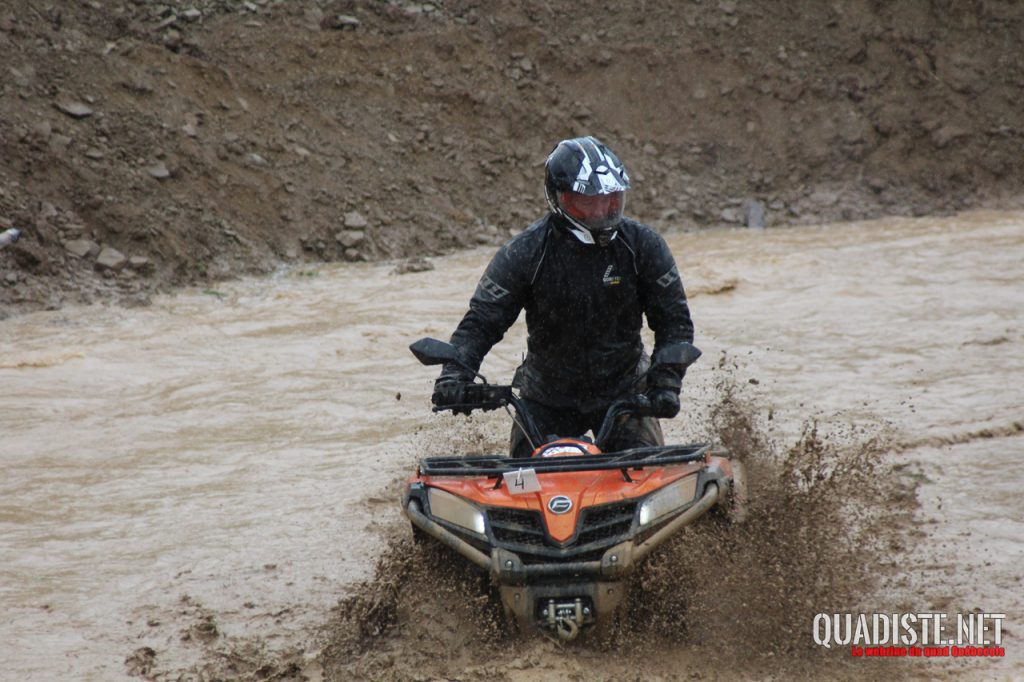 It’s only my lack of experience on the ATV (Jason is a side-by-side guy with nearly zero experience riding quads Ed.) did not help me for the obstacle course and I made some newbie mistakes. But the CForce 500 HO does the job. In the water oval race, the “EggRoll” as Mark nicknamed it was on par with the machines in its class from different brands. The Cforce still managed a mid-pack finish in the water oval and way back on the timed obstacle course due to my own fault (he means he hit the emergency shut-off switch accidentally killing the motor in mid run and took him forever to find it TWICE! LOL! Ed.)

This is the kind of ATV that you buy when you don’t want to spend close to ten grand knowing that you will be able to do what the other brands do. 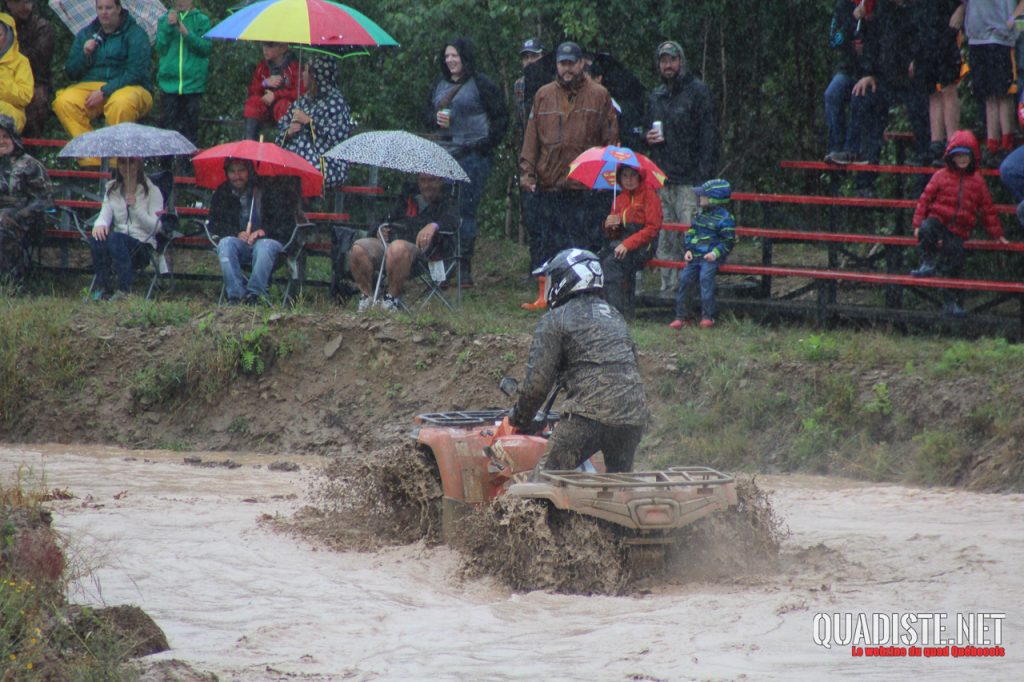 Since Miramichi, the Egg Roll is subjected to a more “regular” use by Phil and I for short rides and odd jobs at the cottage. The machine still rides like a new one without any hassles.

After more than 800 km of torture, mud, water, hard rides and extreme events, our Cforce 500 HO will be back at the dealership for its long-overdue first service and well-deserved rest until the winter season is upon us and the trails are open.. 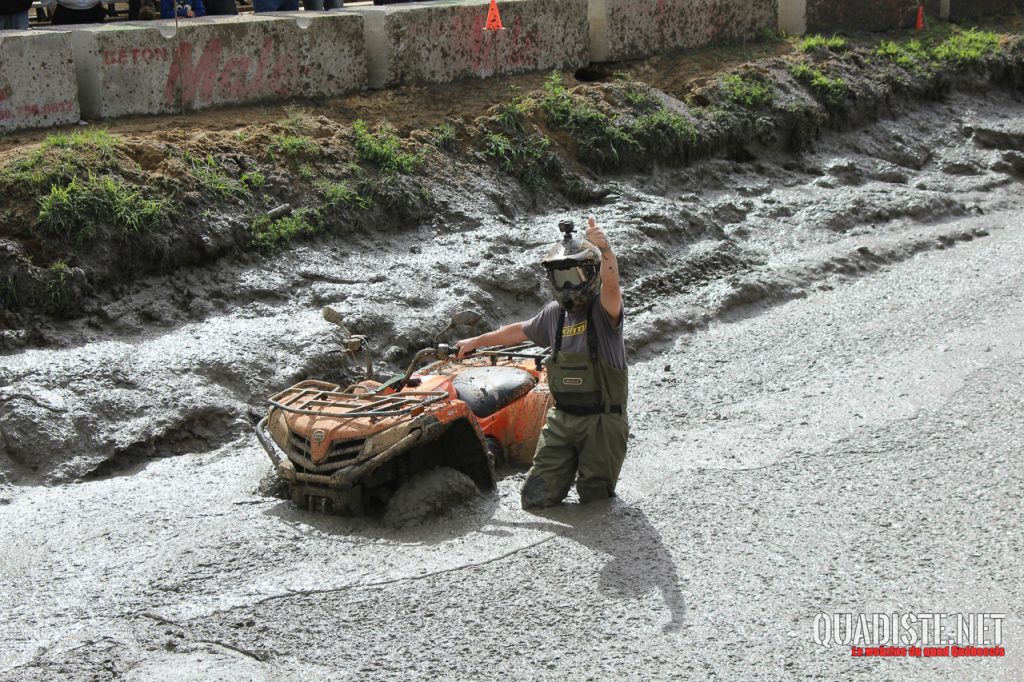